The second part of Story 3 explores more aspects of the DNA molecule both when used as a message and when used to create new organisms. Also, we take a look into biological processes that are defined in terms of positive and negative feedback loops.Here are some questions you might want to discuss with your kids:

Q: What happens when we change a sequence in the DNA or we start messing with the DNA strand and we cut and paste pieces from other DNA strands into it?
A: We get an engineered DNA strand that may or may not exist in nature. The change can be as small as changing the color of your hair or as big as transforming you into a new type of organism altogether, like a mutant.

Q: What do you think is Daena’s best quality that makes her a great DNA detective?
A: First, she knows her biology. Second, she is inventive and tries to find solutions based on her knowledge. Third, her solutions are not complicated. They are simple and they work.

Story 3 hopes to demonstrate some of the latest advances in biotechnology, nanotechnology and biological computing.

All these sciences leverage the unique properties of the DNA molecule that can be used to build molecular structures and to encode and decode information using the A, C, G, T alphabet. The key is to think of DNA as both a message and a recipe. You can read a recipe like any other text. But if you also buy the ingredients and then follow what the recipe says then you are actually “building” something: a dish that can be served.

Q: How does a virus infect a cell?
A: http://www.youtube.com/watch?v=Rpj0emEGShQ

Q: What is a bioengineered virus?
A: It’s a virus that is synthesized in a laboratory. Typically scientists start with a real virus found in nature. They study the virus in a safe environment inside a laboratory and then they try to modify some of its properties by manipulating the DNA code.

Q: Aren’t viruses supposed to be evil?
A: Viruses are typically labeled as “evil” or “harmful” because they can harm a human cell. However, if a virus is engineered it might have a positive effect on a human body. For example, scientists have engineered a virus that infects bacteria in the human body and prevents them from being resistant to antibiotics. This helps the human body recover faster from a bacterial infection.

Q: How is DannyBot a robot?
A: Not all robots are made from metal and wires. Nano-robots (also known as nanobots) are made from molecules like DNA. There is a whole field called Nanorobotics, which studies how we combine molecules into little machines. Check out this walking nanorobot for example:

Q: How can DannyBot read and decode DNA?
A: DannyBot does this using a method known as DNA sequencing, which is a fancy term for “figure out the sequence of A’s, C’s, G’s, and T’s in the DNA if we read it from start to end”. We know that A binds to T and C to G. So, the way to read the sequence of the A’s, C’s, G’s, and T’s, is to try to bind to them with all possible letters in the DNA alphabet and see which one sticks. So if we use a T and we see that it binds to the DNA then we know that we have an A in the sequence.
So, here is an easy exercise for you: what will the DNA sequence be if we see that GAGAGAGA matches? (answer: CTCTCTCT).

Here is a video that explains this in detail (the video is advanced):
http://www.youtube.com/watch?v=91294ZAG2hg

-The recipe of life and death lies in the DNA-

Daena sulked as she looked at the message on the sticker of her vial.

“I’m depressed. I haven’t been assigned anything interesting since I graduated from the Detective Nanoengineering Academy and placed into this horrible tube in this horrible lab. I was voted the most beautiful nanoengineered virus in the Nature Journal. They could have at least placed us near a window to get some sun. Don’t you think, DannyBot?” 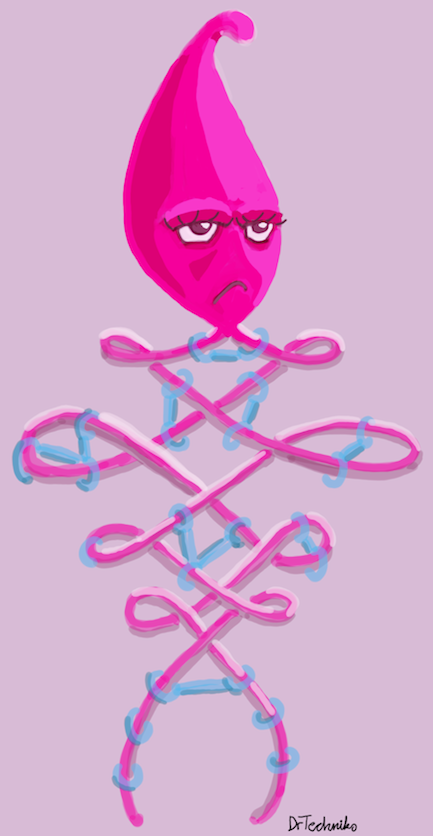 “I don’t see the importance of sunlight radiation,” said DannyBot.

“Are all nanobots as entertaining as you are?” 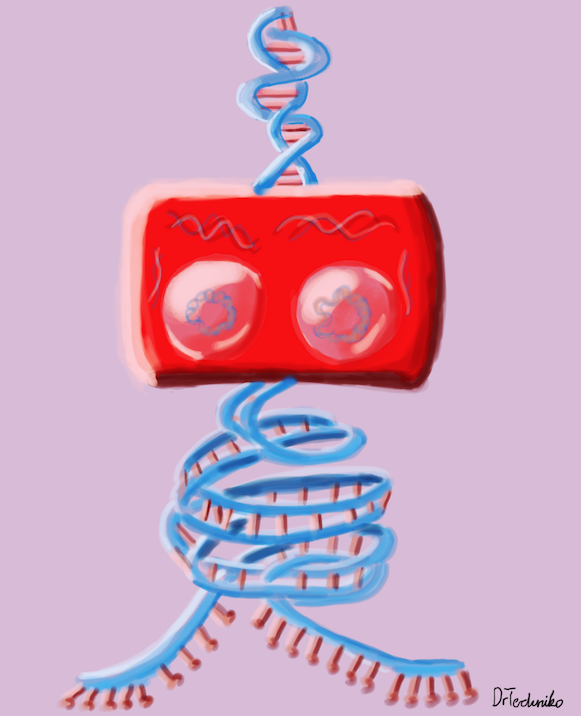 “Nanobots are robots made of DNA strands. We are not made to entertain. We are made to decode DNA, to synthesize DNA, to take apart DNA…” DannyBot went on and on about his functions.

“Booooriiiing. What’s the point of using DNA, if you can’t build something to have fun? Look at the humans in the lab. They are made from DNA like us, but they get to work on interesting things and laugh and go out. Why not us?”

“Because we are not humans,” said DannyBot.

Daena decided to swim around. She was kicking a bunch of floating aminoacids, when a human moved towards the vial and squeezed a drop of liquid into it. A DNA strand appeared into view.

“Looks like we got a message. Another boring mission I bet,” said Daena.

DannyBot swam towards the floating DNA strand, hooked himself onto it and started reading it base by base like a tape: A, T, G, A… Then he decoded the message.

“Message Start. Detective Daena. The chairman has been infected with a genetically engineered Ugga Ugga virus. The chairman will turn into a monkey in the next 12 hours. If word gets out, the government will close the lab and destroy all genetically engineered viruses including you. Your mission is to locate and neutralize the virus. You and DannyBot will be injected into the chairman’s body. Extraction coordinates have been provided. Extraction will commence once the virus has been neutralized.”

DannyBot spit out the last base of the DNA strand. “Message Stop.”

“I really hope we take care of this virus. I don’t want to end up inside the body of a dumb monkey forever.”

The lights went out as the vial was put into a box. When Daena saw the light again it was at a great speed as she was injected into the body of the chairman.

“We are into the blood stream,” said DannyBot. “Cell analysis shows our location to be the chairman’s butt.” 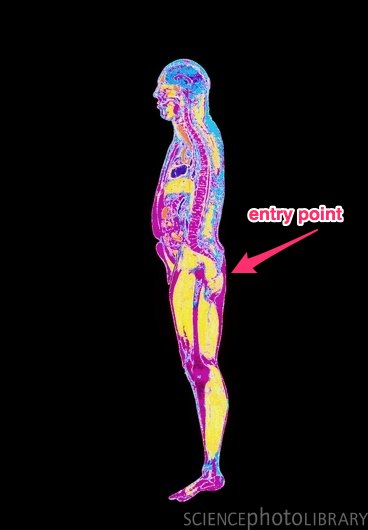 “That is so humiliating,” said Daena.

“Actually, humility is considered a virtue in some human cultures,” said DannyBot.

Daena tightened up. “Let’s go catch this Ugga Ugga virus and feed him to the white blood cells before he spreads. What is the most likely infection scenario?”

“Most likely scenario is airborne infection through the throat,” said DannyBot.

“I’m not looking forward to getting coughed at, but let’s head for the throat.” 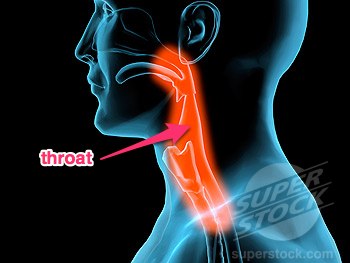 They floated inside the bloodstream through the digestive track to the stomach and from there climbed all the way to the lungs and then the throat. When they arrived, the throat seemed normal.

“I do not detect any viral activity in the proximity,” said DannyBot.

“Great. We are back to nothing. DannyBot, how much time do we have left?”

“And how long will it take us to search the entire body?”

“21 hours. The math indicates we have less than 50% chance to find the Ugga Ugga virus in the next 10 hours,” said DannyBot.

“Simple math won’t get you anywhere, DannyBot. Set course for the brain’s thalamus, the pain processing center. If the chairman didn’t breathe in the virus then someone forced it into him. We can figure out where if we follow the pain. I should be working with humans. I should be named the greatest DNA detective in the world.”

“Actually, you are the only DNA detective in the world, so by definition you are both the best and the worst detective,” said DannyBot.

They jumped into the blood stream next to the spinal cord and followed all the way up to the brain. DannyBot mounted on top of a nerve center and waited for pain signals. After a few minutes, they heard one of the nerves scream “Ay!” “Ay!” “Ay!” 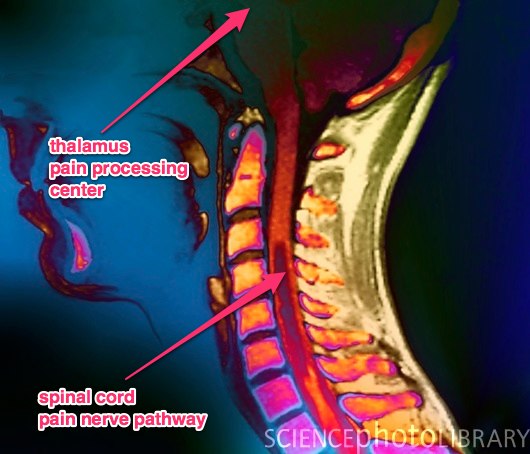 “The pain signal appears to be originating from the left eye,” said DannyBot.

“I’m not looking forward to meeting this Ugga Ugga virus, but let’s head for the left eyeball.” 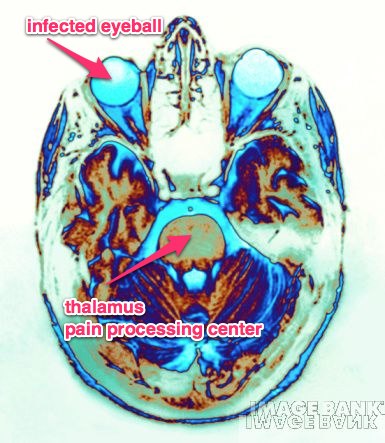 And so they floated from the brain to the nose and from there to the eye. As they entered the eyeball they shook from their horror. Thousands of big fat viruses that looked like hungry monkey heads with twisted sharp teeth swam inside the eyeball. Some would attack and try to eat each other, but most of them attacked the chairman’s cells. Their jaws would grab onto a cell and eat their way into it. Once they disappeared into the cell, there would be a moment of silence. But only a moment. The cell would then grow and grow and grow like a balloon and then explode.

“Bang!” a cell exploded near Daena and out of it came a hoard of ugly twisted monkey heads. They swam towards a bunch of eyeball cells nearby. But one of them, a really big one, turned and looked at Daena… 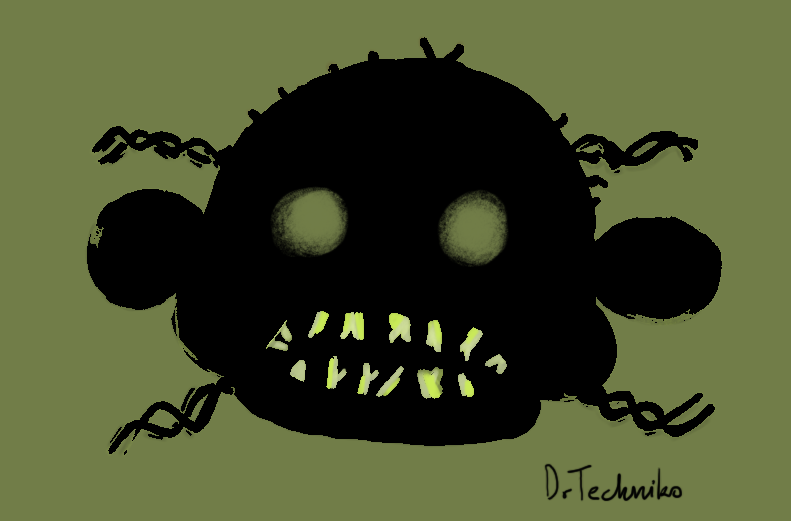